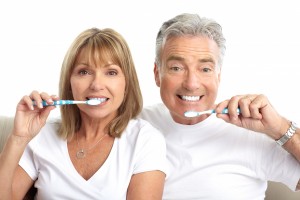 When people come in to us needing dental implants, it’s often because they have advanced forms of gum disease. It’s not always their fault…some diseases and medicines can cause people to have problems with their teeth. But more often than not, it’s because they didn’t take better care of their teeth, starting with a lack of brushing. And as their family dentist, we try to guide them in the right direction and get them the help they need

But there are some people on the other end of the spectrum. Some people come in with absolutely no gum disease, but their excitement for brushing has gone too far. These people are actually brushing their teeth too well!

What’s a dentist office to do? Do our best to fix the problem, of course!

Brush with a soft brush: If it were up to us, we’d prevent the selling of hard toothbrushes altogether; there’s really no need for them unless you’re removing grout from around your sink! Most people simply need a soft toothbrush, which is better for your gums and for your teeth as a whole.

Don’t brush too hard: Many people really feel the need to get in there and just scrape away at their teeth and gums. But plaque, the clear-to-white gummy stuff that gathers on teeth near the gumline, really isn’t that hard. If you stay on top of your brushing and brush softly yet thoroughly, you’ll be getting nearly all of the plaque before it becomes tartar.

Find the right toothpaste: When you’re in to see your family dentist, talk with them about the type of toothpaste you’re using. If you’re exceptionally susceptible to plaque, we might suggest one toothpaste over another. if you’re not, the cheapest toothpaste in the store might be perfectly fine.

Don’t brush too often: We met someone who brushed five times a day: once in the morning, once after lunch, once after work (to clear out the afternoon snacks), once after dinner, and once before bed. And you now what? That’s too much, because by doing so he wore away his gums, and his dentin (the outermost part of the tooth) was thin. While we admire his interest in brushing, he’d simply grown to enjoy a clean mouth so much that he was destroying his gums, which could eventually end up destroying his teeth altogether. We’ve since talked him down to brushing three times a day, though two would probably be fine.

Don’t brush immediately after meals: For most of us, there’s at least some acidic food in every meal we eat, whether it’s soda, fruit and vegetable juice, tomato-based products (salsa, pizza sauce, pasta sauce), wines, or sugar. Acids from foods soften dentin, making it easier to scratch and wear away. These acids typically stick around and soften the dentin for around 30 minutes, so avoid brushing your teeth immediately after you eat. Don’t worry, the food (and the bacteria that destroy teeth)  that remains on your teeth isn’t going to do any harm in such a short amount of time. If you’d like to help your teeth along, finish your meal with a glass of water and swish it around. Better yet, drink water for the entire meal.

When you come in to see your family dentist, we’ll take a look at your teeth and will probably be able to tell if you’re going too far. If you’ve been brushing too hard, we’ll try not to make you feel too bad…after all, nearly all of us learned how to brush from our parents, not from our pediatric dentist.

We can help you relearn how to brush your teeth. If you have questions, be sure to bring them up so that we can find the best way of brushing for you. Ready for a checkup? Schedule an appointment here!